Some buildings personify the historic era in which they exist. Such was the case with the Majestic Hotel in Lake Charles. Built in 1906 on the corner of Bilbo and Pujo Street by a group of Lake Charles businessmen, the grand Majestic was a shining example of modern architecture and amenities. The $100,000 in funding was secured by the stock holders, most of whom were residents of Lake Charles. Every president from Theodore Roosevelt to John F. Kennedy was a guest at the Majestic, although not necessarily while in office. At the time of the Louisiana Maneuvers just prior to World War II, the Majestic hosted General Bradley and General Eisenhower. 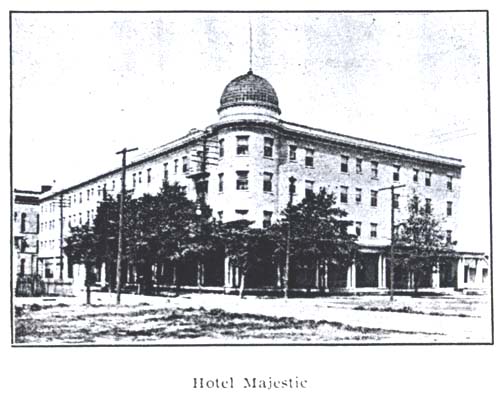 Although there were many other noted hotels in Lake Charles at the time, the Majestic was bigger and grander. Local historian Maude Reid wrote of the Majestic: “The spacious south gallery of the Majestic Hotel bespeaks the Southern hospitality to be found within its doors.” It featured a popular restaurant, which served as a popular gathering place for both guests and members of high society. There were ceiling fans in every guest room, and it had its own power plant and water system. The Majestic also had its own fire pump, which was used to saturate the building and protect it from the infamous fire that destroyed much of downtown Lake Charles in 1910. The hotel and the various shops and offices in the complex escaped the fire largely unscathed. The Majestic stood proudly until the mid-60’s when it was torn down.

Fast forward 50 years, and there is a new “Majestic” in Lake Charles. The Majestic Hall event center at Walnut Grove, located on the first floor on the Lawton Building, reflects the classic architectural style of the original Majestic Hotel. “Every aspect of Walnut Grove is linked to the history of our region, both in location and in the names we have chosen for streets, parks and buildings throughout the neighborhood,” explains Holly Lawton, Walnut Grove Founder and Design Coordinator. “When it was time to choose a name for our event center, it seemed fitting to pay homage to the hotel that played such a prominent role in the social history of Lake Charles.”